Modern technology has come into tree climbing in the same way it has come into the rest of our lives. Arborists arrive on the jobsite driving vehicles with computer controlled fuel injection, carrying cell phones with them up in the trees and using space-age fibers in the ropes. The climbing systems used are much more complex also. Technology makes our lives easier and more fun. We should view technology as a buffet; there are many dishes to try, sample all of them when it’s safe – then go back and load up on your favorites.
When I was 12 years old I started dragging brush for my next-door neighbor. He would drop the limbs from the tree, then his son and I would cut them up with bow saws and stack the brush on a trailer – fairly low tech. Now, technology has come full circle. More and more, my jobs find me pruning small limbs with very efficient handsaws. This style of work doesn’t generate large quantities of brush. Most of the time, I won’t bring a chipper to the job site. Instead, several days worth of trimming go
onto the trailer, which is pulled by a van that is fully equipped and much more comfortable than a chipper truck.
Ours is a very testosterone-charged profession and some don’t want to hear about the precautions we should take to work safely. What does it take to be a tree climber? I bought a book by John Stuart
Martin titled “The Homeowners Tree Book.” In the chapter called Pirates, Gypsies and Nobleman, he writes, “… that any man content to earn their living by climbing trees has to be a little ‘tetched’to start with. They have to be lean, muscular, nerveless, and somehow persuaded that trees are challenging. They must want to climb and conquer them no matter how tall and perilous. Due to their concentration on survival and a pride in their climbing prowess, all tend to be prima-donnas: sensitive to criticism and quick to anger.” This book was written in 1962. Not much has changed, although we have better equipment today.
In my experience, climbers come in two categories – traditional and progressive. One is not better than the other, just different. A traditional climber learned one technique with one rope and sticks with it. You might see that person ascending into the tree using a body-thrust technique rather than learning modern and more progressive ascent techniques. A traditional climber will have a pretty simple climbing system, probably a rope and a rope snap. An incremental piece of equipment might

be a carabiner, which is a step away from using a typical double-locking rope snap. Atraditional climber probably doesn’t use a false crotch for the climbing line, and will only work the outer third of the crown with a pole saw. Another sure sign of a traditional climber is the clunking noise they make from all the steel they carry around.
A progressive climber has learned a climbing system and constantly adds new pieces. The goal is to find the easiest way to work. The less energy we spend at work means more energy we have to take home and spend with our families – or to save for the end of our careers. A progressive climber uses a throw line and foot locks into the tree. A progressive climber uses split tails of some kind with a high-performance friction hitch, slack tenders and a false crotch, because it provides higher performance and saves wear and tear on the rope. A progressive climber works out to the tips of the branches with a handsaw. If a chain saw is used, it will probably be in the inner half of the tree. The progressive climber rarely uses pole saws because they have learned how to climb out onto the tips of the branches to do very good cuts. The progressive climber jingles to the sound of aluminum as they climb.
Learning new techniques Arborists are scavengers. We have some unique things that we have developed just for working in the trees, but we have gone out and picked out different bits from a lot of related working-rope professions. We have done a pretty good job of adapting tools from other parts of the vertical world, but I don’t think that we have done as good a job of bringing over all the techniques. There are traditions from mountaineering that I see we are starting to build into arboriculture and tree climbing.
Incorporate new tools and/or techniques into your climbing system, but do it ‘low and slow.’ When changes are being made to the climbing system, add them one at a time. Once the climber has mastered the particular application, add another new item. If you are going to add a false crotch

Placing the han d saw on a leg sca bb ar d makes it much easier to access while in the tree.
Taking a d vantage of friction-re d ucing false crotches makes ro p e ten d ing easier.
During ice storm cleanu p , cram p ons an d stiff, p lastic b oots can p rovi d e goo d sta b ility an d traction. They can only b e use d for removals though. Having the front p oints makes ascen d ing an d p ositioning much safer.
to your climbing system, don’t take that throw line; shoot it up to the top of the tree and start to figure out how to set the false crotch. Do it on a branch 6 feet off the ground. Work with the new procedures, experiment with them and take your time.
Single Rope Technique Single Rope Technique (SRT) is gaining popularity as an access system. The access line is set in the tree and anchored at the
base. Once the climber gets to the tie-in point, they can set up a Doubled Rope Technique (DRT) – sometimes called a traditional system – for moving around the tree. There are many advantages of SRT. One of the biggest is that a line is always set in case an aerial rescue needs to be performed. Having the line installed will save time getting the rescue climber close to the patient. Some tree climbers are working in the tree using SRT.
False crotches Adjustable false crotches (AFC) can be made with readily available components. Using a false crotch reduces rope wear and damage to the tree from the rope moving over the bark. The climber uses less energy to move up the rope. Another use of the adjustable false crotch is for working down the spar. Choking the AFC against the trunk allows the climber to move down the trunk and be secured in an overhead climbing system. When the climber is ready to descend, the system is ready to go.
Gloves Thin grippy gloves allow the climber to hold tools and branches with less force. Since the sticky coating holds better, the climber saves energy. When climbing the rope, the tacky grab helps the climber. Also, the gloves protect the hands from minor cuts and scratches.
Lanyard The lanyard that I’m currently using is double-ended, double-adjusting – or DEDA. The 20-foot lanyard has a snap on each end. An adjuster is on each hip with color-coded snaps. Having the DEDAlanyard gives me a lot of tie-in possibilities. With the long length, it becomes a second, short climbing line, too.
Leg scabbard Having the handsaw in a leg scabbard is so much handier than having it on one’s hip. Getting the saw is easier because the handle is at arm’s reach all of the time. Instead of being on the saddle along with lanyards, chainsaws and other gear, the climber only has to reach down to get the saw.
Hearing and head protection The orange ear protectors are rated for 22 dB attenuation; the black are rated for 27 dB. Studies have found that, generally, over-the-ear protectors lose about 10 percent of their efficiency because of poor fitting over eyeglasses and hair. With insert protection, closer to 100 percent protection can be attained. Using earplugs attached to the glasses keeps them handy all of the time.
Kevlar helmets give more protection to the climber’s most important tool, his or her head. Any helmet without a chinstrap is likely to get bumped off at some time – usually the worst time. Chinstraps can be added to helmets.
Crampons During ice storm cleanup I’ve found that using my crampons and stiff, plastic boots gives me good stability and traction. They
can only be used for removals though. Having the front points makes ascending and positioning much safer.
Conclusion When I teach people a new knot, I won’t let them use it in a tree until they can tie it without looking. Once they can do it by feel – and learn its applications and shortcomings – only then can they use it in the field. This is important because there may be times when the sweat is burning your eyes and you can’t really see the knot. I want my climbers to know a knot by feel as well as by looking at it. I also expect them to stop and check their gear regularly. I
constantly go through my system doing gear checks. Every time I clip and unclip, I look at my system. This only takes moments. I want to make sure that something didn’t change five or 10 minutes ago.
I hear a lot of people say that tree work is a skill. Others say that tree work is like chess. To me, tree work is like backgammon; a lot of skill involved, but there is also an element of luck. Fortunately, I have had the good luck of being on the winning end.
Tom Dunlap is owner of Canopy Tree Care in Robbinsdale, Minn.

Ice clim b ing cram p ons shoul d only b e use d for removals, as they can d amage a healthy tree.

Working On A Music Video 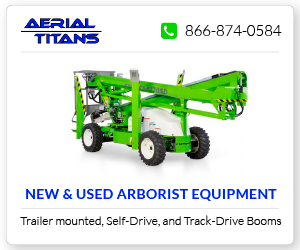